Do you have questions?

Gladly we advise you personally. Call us, email us or use our contact form.

What belongs together grows together

It is hard to believe but Neuenhauser Kompressorenbau (NK) has already been operating from its new location in Ringe/Neugnadefeld (Germany) for more than a year. I can say we have settled in well to our new surroundings and are happy about the new environment, our new offices, state-of-the-art test rooms, assembly areas and new neighbour, the hpl-Group. For this reason, I would like to take the opportunity and present our new place of activity.

With the assistance of external service providers and thanks to our logisticians and mechanics working overtime we required approx. two (2) weeks for moving the complete material to our new location. Arranging the assembly and storage areas etc. required some extra time and was not completed until the beginning of this year.

In the following, I would like to present our singledepartments, from the warehouse, followed by the air compressor assembly, the air receiver assembly to the administration offices.

Our warehouse for storing blanks and finished parts is situated in the rear of the company premises. It includes the uninsulated hall for the storage of pallets and wire mesh boxes as well as the goods receiving and packaging department. An important part is the warehouse for small parts situated on two floors that includes all C-class parts, machines parts, e.g. crankshafts and pistons, as well as spare parts. Furthermore, two (2) packaging places for spare parts are situated in the lower part of the warehouse.

The assembly with four (4) separate test chambers is situated in the middle of the NK hall nave. Next to the supervisor container, there are assembly desks for TDI components and cooling systems. Most of the space in the newly constructed hall is required for the final assembly of air compressors from which the finished air compressors and modules are directly forwarded to one of the separately operated test chambers. The single test chambers offer new possibilities for the flexible execution of tests regar-ding the air compressors' lifetime and performance.

The product group "Air receivers" follows in direc-tion to the adjoining street "Spangenbergstraße". Flat sheets are cut and rolled here on a shearing and rolling machine. Vessel shells are produced by a longitudinal seam welding machine using the SAW process after which a calibration and roll bending process is followed. Torispherical heads are then welded together on a circumferential seam welding machine. On the opposite side, there are welding workplaces for the manufacture of special designs and components, e.g. feet for the upright installation of air receivers. After those have been passed successfully the pressure test and inspection conducted by the German Technical Inspection Association "TÜV" or maritime classification and inspection societies, they are coated and painted both inside and outside.

In the ground floor of the office building, there are the pro-duction management of the air receiver manufacture, the production planning, incl. purchase as well as the spare parts and logistics department. In close proximity to the design department of the hpl-Group, our department of mechanical design has moved in the first floor of the new building. The sales as well as the project management team of the NK product groups "Air compressors", "Air receivers" and "Compressed air starters" have also moved into their new offices in the first floor overlooking one of the adjoining streets "Spangenbergstraße" or Kanalstraße.

At the end of September 2017 after having accustomed ourselves to our new surroundings, we started assembling the first compressors in Ringe in order to meet the approa-ching and agreed delivery dates.

A very interesting customer order for us included the delivery of compressor and compressed air tank modules for the new gas engine power plant in Kiel. Since these special projects were very complex and we were exposed to a strong, local competitor, we are all the more pleased to have received this order.

In addition to compressor and compressed air receiver modules, we also delivered starting air assemblies for the same project to a world-wide operating manufacturer of large motors. This project consequently includes all product ranges of Neuenhauser Kompressorenbau with its own strengths.

We hope that this project considerably strengthens our market position within the range of power plants and will establish "Neuenhauser Kompressorenbau" as „One-Stop-Shop for starting and compressed air equipment and acces-sories".

In September 2017, Neuenhauser Kompressorenbau started moving to its new location in Ringe / Neugnadenfeld (Germany). The employees of our product group "Air receivers" were the first packing their moving boxes followed by those working in the design, purchase, logistics, production planning and sales department. Manufacture and Assembly as well as the NK warehouse were the last departments that left the familiar surroundings in Neuenhaus. 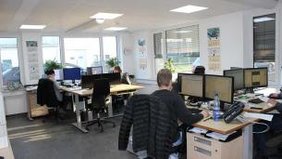 The new offices feature a bright and modern design. 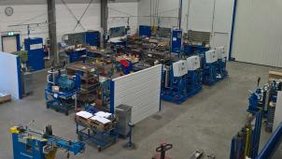 Adequate space for the assembly of customized compressed air modules is provided at the new location in Ringe/Neugnadenfeld.

One of the first compressor modules manufactured in Neugnadenfeld.

The delivery of starting air modules for the gas engine power plant in Kiel was part of an important order dealt with by Neuenhauser Kompressorenbau.